Untamed and Unabashed by Liza O'Connor 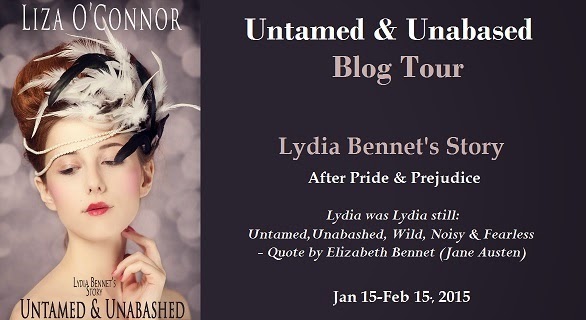 Welcome to Lydia’s Bennet’s story.
If you’ve read Pride & Prejudice, you know Lydia is the youngest of the five Bennet sisters. Like her siblings she has little chance of making a good marriage. Still, Lydia is not your typical heroine. She doesn’t cry over her hopeless future. She sets about to change it, without concern to propriety or decorum.  Lydia falls to the charms of Wickham when she’s sixteen, certain a marriage to the handsome fellow is the beginning of her fabulous life. Wickham’s many failings reveal themselves in short order and Lydia realizes she’ll have to secure a better future for them both.
At each stop, I’ll share a new bit of detail from Pride & Prejudice that touches upon Lydia’s story:
In Jane Austen’s Pride and Prejudice, Lydia showed a preference for Captain Carter and Mr. Denny which is presumed to continue in Brighton.
Liza thoughts: I believe Lydia set her sights on Wickham while in Brighton because she believed her sister, Eliza, still preferred the young lieutenant more than anyone else. What a great coop it would be to steal Wickham away from Eliza.
This, of course, would suggest that Lydia disliked Eliza a great deal. While the constant lectures over Lydia’s behavior would not have endeared her to Eliza, I’m thinking the major issue was her father’s preference to Eliza and his caustic remarks to his younger daughters, as if he held them at fault for not being boys. 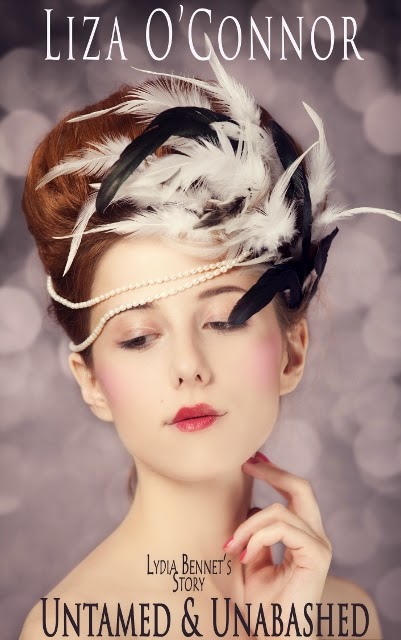 Elizabeth Bennet told her story in Pride and Prejudice. Now Lydia Bennet tells her side of her whirlwind marriage to Lieutenant Wickham. The youngest of five daughters with a pittance of a dowry and no hope for a good marriage, Lydia feared her life was doomed from the start. She learns how to set herself apart from her sisters and gain the attention of young men. She hones charm and flirtation to an art. Willing to take risks, she manages to acquire a substantial dowry and marries her beloved Wickham. Yet, her life remains on the brink until she gains the patronage of a wealthy Duke trapped in a loveless marriage.

“Lydia was Lydia still; untamed, unabashed, wild, noisy and fearless.”
—quote by Elizabeth Bennet from Pride and Prejudice by Jane Austen
A Unique
EXCERPT
“How long until we reach London?” Lydia asked.
“We will be there within a few hours if the horse holds up.”
She stared at the animal. Such an ugly creature, speckled with odd colors. Lydia preferred solid white steeds with black tails. She hoped no one saw them in their current unfashionable state. “You are planning to sell this horse and buggy, I pray.”
Wickham glanced at her in surprise. “First thing.”
She sighed happily and curled her hands around his arm. “You are the very best of husbands.”
He patted her leg. “And you are the most obliging of ladies. I had not realized what a delightful pragmatist you were.”
She wasn’t certain what ‘pragmatist’ meant. No one had ever called her that before. Recalling her compliment to him before his declaration, she decided it must mean pleasing.
“With four sisters before me and no dowry to speak of, I realized early on I needed something to set me apart. Jane was the reputed beauty, Eliza the wit, Mary the moralist.” She rolled her eyes at the mention of Mary. “And then Kitty, the lost.”
Wickham smiled at her. “Kitty, the lost?”
Lydia nodded. “She has failed to make a mark for herself. She might as well be a ghost. No one, neither my parents, nor the servants take any notice of her at all.” Lydia snorted. “Well, I decided early on no one would ignore me.”
Wickham tugged on a loose curl caressing her rosy cheeks. “I cannot imagine such a thing.”
Lydia swelled with pride at her husband’s words. “Not now. But had I not seen the lay of the land and acted accordingly, I daresay my fate would have been the same as Kitty’s. After Jane and Eliza were born, my parents were sick to death of having girls.”
She adjusted her hat to an angle. “I realized I needed to be special in a manner that one of my parents would favor me above all the others.”
Wickham turned towards her. Admiration shown in his eyes. “You chose your mother.”
Lydia nodded. “Jane had been her favorite, but I thought Jane much easier to unseat than my father’s pet, Eliza.” She rolled her eyes. “It was laughably easy. All I had to do was mimic my mother’s responses to everything said or done. By the age of five, I had ousted Jane and become my mother’s beloved. Of all the girls, I received the best hats, laces and gowns. Reworked gowns went to Mary and Kitty, never to me.”

More About the Author
Liza O’Connor’s favorite books are Pride & Prejudice and Douglas Adams’ four book trilogy, The Hitchhiker’s Guide to the Galaxy. Go figure…
Raised in the southern mid-section of U.S., Liza escaped to the East Coast once out of college. She’s worked as a journalist, a radio DJ, a security guard, a stock broker, a strategist, and a business solutions consultant to name a few of her many occupations.  Again…go figure.
She learned to fly planes, jump out of planes, hang-glide, kayak and scuba dive, to name of few of her ‘let’s kill Liza’ moments. However, her favorite activity is to hike with her dog Jess among the shaved mountains of NJ.
Here are additional Historical Novels by Liza O’Connor
A Humorous Sleuth Series: The Adventures of Xavier & Vic
The brilliant English Sleuth, Xavier Thorn, takes on a cheeky apprentice who turns out to be a young woman. Vic prefers to dress as a young man so she can live a more interesting life in the Late Victorian era. Overtime, Xavier makes her his partner in all ways.
The Troublesome Apprentice — The greatest sleuth in Victorian England hires a young man who turns out to be a young woman.
The Missing Partner — Opps! The greatest sleuth in Victorian England goes missing, leaving Vic to rescue him, a suffragette, and about 100 servants. Not to mention an eviscerating cat. Yes, let’s not mention the cat.
A Right to Love — A Romantic spin off from the Adventures of Xavier & Vic. The gypsy pirate Jacko falls in love with a compromised lady of high society.
The Mesmerist — The Mesmerist can control people from afar and make them murder for her. Worse yet, Xavier Thorn has fallen under her spell.