Novels for the Holidays

Posted by Aurora Springer at 12:36 PM No comments:

Here we go again with snippets from our stories.

Continuing from last week, we follow the adventures of Violet and Taranis, the Psi Master.


They jumped out of the side doors and walked toward the blue-hued trees, towering in vivid contrast to the dim yellow of the low clouds. Violet admired the colorful flowers of the vines draped over the tree branches. The dark understory paths beckoned to her with their promise of mystery in the shadowy interior. Her senses reveled in the teeming denizens of the jungle, the tiny sparks of small creatures and the hungry stab of large predators.
Taranis halted at the verge of the forest in front of a dirt track, leading into the interior. Violet stood next to him, and gazed at his stern face framed in straight black hair as he bent over the detector strapped over his shoulder. As usual, he exuded power and authority. During three days together, she had seen nothing of his vaunted psi powers.
One of the three-winged vultures swooped down to examine them. The Psi Master glanced up, warned by the black shadow over him.
Violet said, “It is just curious.”
He stared at her, green eyes thoughtful, “Can you sense the thoughts of the vulture?”
Violet blushed under his scrutiny, “Yes, I am an empath.”
“Interesting!” he commented and returned to his perusal of the detector as if her ability was unimportant.


Please return to SFFSat for the other snippets.


Many authors and fans of science fiction love aliens. My aim is to inspire writers with ideas from weird aliens in fiction and from the perspective of a scientist with a life-long interest in the diversity of life on our planet.

Weird biology fact: We have traces of viral DNA in our genomes.

First, what are aliens? Aliens are intended to have inhuman characteristics. I will use broad categories of humanoid, animal based and other.

In Science Fiction Romance, human-like aliens are common, since a degree of physical compatibility may be desirable, although not essential. Humanoids predominate in video media, partly because they are easier to represent. Consider Dr Who: even the exterminating Daleks are mutated humans in a robotic shell.

Animal-like aliens are also common, and many resemble people in fur. Felines are popular, such as the lion-like Hani of C.J. Cherryh, Anne McCaffrey’s Hrubbans, and the Kzinti of Larry Niven.
Dragons are clearly related to reptiles and fall into the category of animal-like aliens.

One early example of non-humanoid aliens is described in the War of the Worlds (1897) by WG Wells. 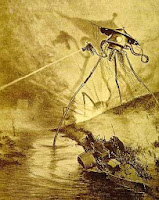 Piers Anthony in his Cluster series created a variety of non-humanoid sentient aliens. He used the unifying theme of aura as a means of communication and exchange of minds into different bodies. In Thousandstar (1980), a humanoid woman falls in love with an alien resembling a giant amoeba (my description).

Weird biology fact: Insect metamorphosis mean that delicate winged butterflies with six legs are the adult forms of squiggly, voracious caterpillars with many legs and prolegs.

Think of the myriad varieties of animals living in the sea. Many are spineless invertebrate animals such as jellyfish, sea cucumbers, and squid. 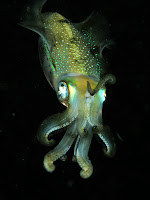 Intelligent plant-based aliens are less common. They include Tolkien’s Ents, which are essentially walking, talking trees. Carnivorous plant-like aliens are popular, such as the walking plants with lethal stings from John Wyndham’s The Day of the Triffids (1951).

Weird biology fact: carnivorous plants can move fast, but they cannot walk. On the other hand, some seeds fly!

Can you imagine intelligent bacteria? Bacteria, aka prokaryotes, can survive in extremely hostile environments, in soil, ice, boiling springs. They communicate via chemical messages and exchange pieces of DNA, like the genes for antibiotic resistance. Different bacteria can combine in a colony called a biofilm. What fascinating elements for novel aliens!

Weird biology fact: the descendants of ancient bacteria live in your cells as the energy producing mitochondria.

Aliens can include entities of gas or pure energy. Sir Fred Hoyle, the eminent English astronomer, disputed the Big Bang theory. His 1957 novel, The Black Cloud, explores the idea of an intelligent interstellar cloud. Aliens can be entities of pure energy, although they may be obvious of us.

I hope some of these weird life forms will inspire you to create unique and believable aliens in your stories.

Dragons of Vkani, Book II in series Atrapako on Eden

http://www.amazon.com/dp/B00LS1EU6K/
This Science Fiction story is set on the two remote planets of Eden and Vkani. Peaceful Eden has an independent colony of Terrans and a small population of Atrapako. The alien Atrapako sport spiky crests, sharp claws, and scales covering massive humanoid bodies. Their scales come in one of four colors, representing their traditional class system.
The happy family life of Sa Kamizan and Lucy Stannis is interrupted when the Space Traders bring a distress signal from his sister, Veela. They must travel to the hostile Atrapako planet of Vkani to rescue Veela, the Dragon Lady of Ravenak. The rescue teams encounter new friends and deadly foes in the hostile, barbaric environment where warlords wage battles amid ferocious sandstorms. In their search across the inhabited continent, Sa Kamizan demonstrates his prowess with a sword, while Lucy employs explosives, and, of course, the dragons, as they combat treachery by power-hungry Blues.

In my "day job" I am a scientist, although I have composed stories as long as I can remember. This year, I achieved my life-long ambition to publish novels. My works include science fiction and fantasy with romance and a sprinkle of humor. I was born in the UK and live in Atlanta with my husband, a dog and two cats to interrupt my typing.

Posted by Aurora Springer at 6:52 PM No comments: