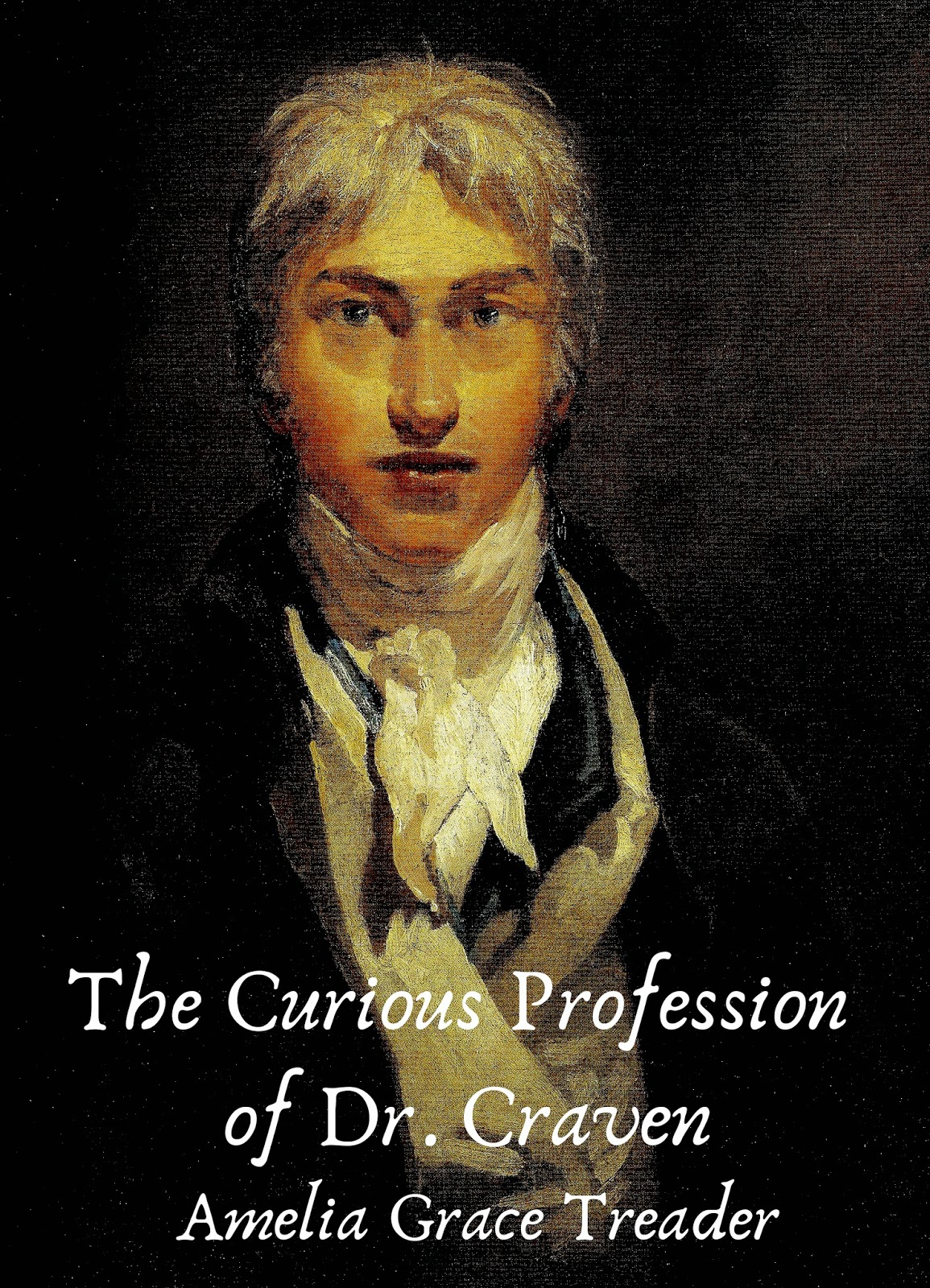 Blurb:
What is a poor anatomist to do? Twenty pounds, wasted, up in smoke when the beautiful young woman his grave-robbing supplier brought awakens as he's inspecting her. If he's an ethical young doctor, there's only one choice; nurse the girl back to health and restore her to her family. That's when his troubles start. The woman can't remember anything. As his household nurses her and her memories return, their mutual attraction buds into a flowering passion. One of the things she has conveniently forgotten is her arranged engagement to the vulgar, but wealthy, son of a Northern industrialist. Even when the young man conveniently decamps with another woman, there's some deep dark secret about Dr. Craven that her father believes makes him ineligible. Resolving the resulting tangle in this sweet historical romance takes the combined efforts of the doctor's once profligate brother the Earl of Craven, a displaced French royal le Duc de Bourbon, and the visit of a mysterious French Baron to Almack's.

Excerpt: Dr. Craven meets his fate. He just doesn't know it yet. He's preparing to dissect another body when things come undone.

In the meantime, the boy undid the bandage that held the woman’s jaw shut tight. As he pulled it off her, her mouth opened and she gasped for air.
He ran to his father and the doctor, shouting, “I tell you, Doctor, she’s alive!”
Jonas and the doctor walked back to him, carrying a decanter of the brandy with them.
Dr. Craven said, “Can’t be, Lad. That must just have been gas escaping from the body. They do that, you know, as they decompose.”
The elder resurrection man nodded, “I’ve seen it before, many times.”
His son replied, “So have I Dad, but this wasn’t that. She gasped for breath when I undid the bandage.”
Dr. Craven said, “I’ll prove she’s dead. Put her on the table.” The resurrection men lifted the body from the floor and put it on the examining table. This cadaver was light for the two of them to lift. It having once been a delicate young female; they were gentler with it than they were usually.
The doctor gave his hands a quick rinse. Something he did more for superstition than any rational basis, and then he examined the body.
“She is warmer than I’d expect. The decomposition must be advancing rapidly. I’ll need that ice.” He paused. It, no not it, she breathed. It was a gasp, a weak one at that, but a breath.
“Brandy!” He shouted, “and be quick about it, man. She’s alive.”
The youngest resurrection man ran for the decanter and returned as fast as he could. “Here, sir.”
The doctor took some and moistened the woman’s lips with it. She gasped again and stirred. “She’s cold, bring a blanket and a warm brick.” He immediately unwrapped the winding bandages from her body and untied the bindings on her legs and arms. “Come man, rub her legs. We must get the blood flowing.”
Between the warmth, the brandy, and the commotion, the woman’s eyes suddenly opened, and she sat up. She saw this handsome dark-haired man looking at her. His concern for her was evident in his face.
“Is this Heaven?”
“No. England.”
“Close enough.” Then she lay back and closed her eyes again.

Bio:
Amelia Grace Treader is an author of (mostly) historical romances, with the occasional science fiction romance thrown in for good measure. Based near Atlanta, she writes a unique combination of romance and action. She enjoys reading history, science fiction, and historical romance. While a child of the American South, She's also an Anglophile and not unfamiliar with the south of England. They're more alike than you know - There's even a Krispy Kreme doughnut shop in the Oracle in Reading, and they're just as good as in Kennesaw.
Despite the descriptive name of romance as “bodice rippers,” Amelia tends to write more in the sweet style of "bodice unbuttoners" where the romance is there but not explicit. After all, a good quality bodice was expensive, and only a cad or puppy would damage it. It's also more consistent with the behavioral conventions that were in place at the time.

Posted by Aurora Springer at 5:26 PM No comments:

Greetings to all Weekend Writing Warriors and Readers.

I'm joining you for the first time today.

My eight sentences are from "A Tale of Two Colonies" and suggest the perils of planet Delta, inhabited by giant arthropods and the descendants of the lost colony.

Conley caught hold of Lily’s right wrist, while he grasped his bared sword blade in his other hand. He held the sword so it pointed down between his legs. Lily wondered what fearful danger lay at the bottom of the hole. In an instant, she saw it and stifled a scream. They were funneling inexorably into a monstrous mouth ringed with jagged triangles of teeth. She struggled to grab her laser with her free hand.
The awful mouth was only a few scant feet away. With a swift motion, Conley threw his sword into the gaping mouth. 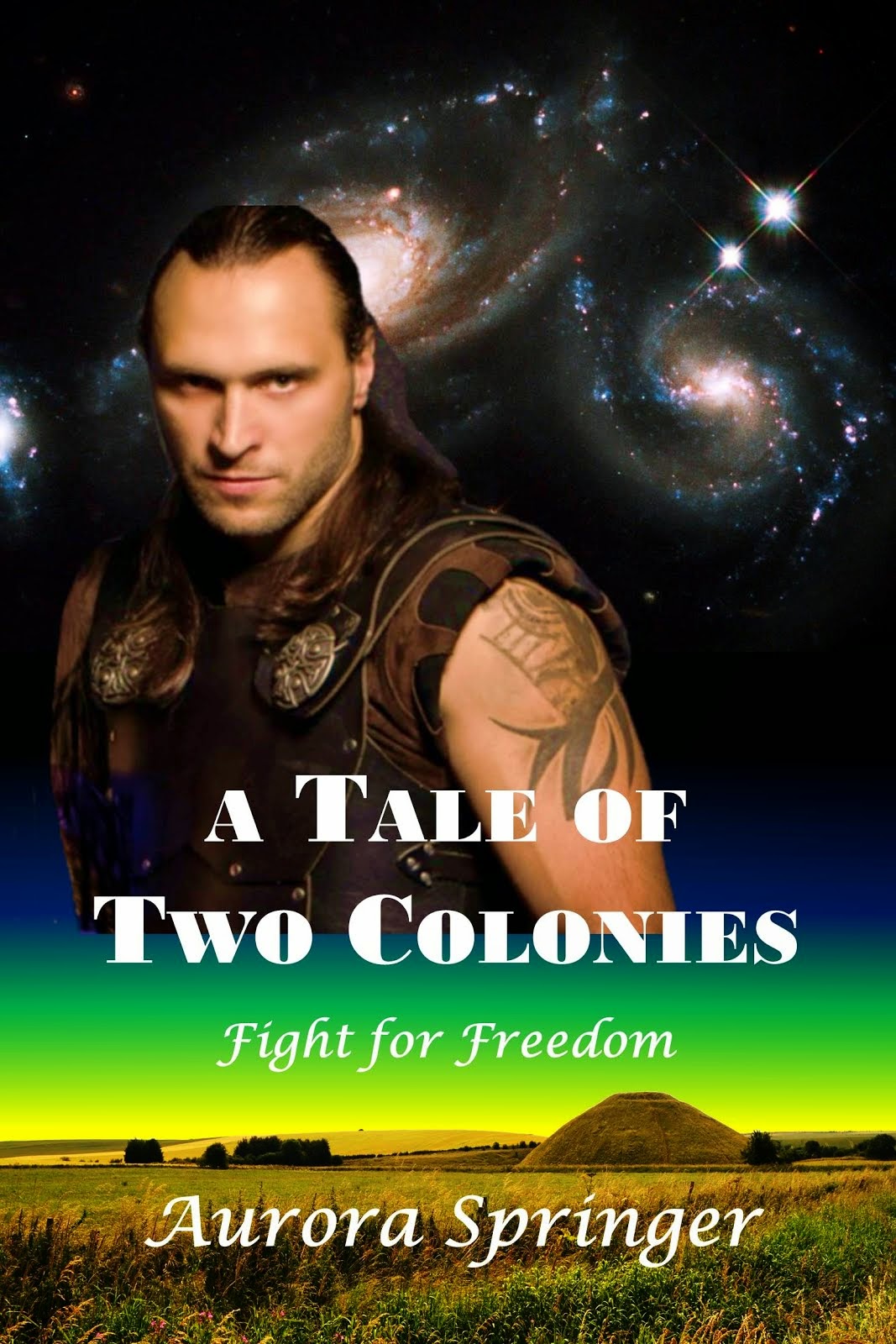 Snippet for #SFFSat from A Tale of Two Colonies

Welcome to another Saturday of Science Fiction & Fantasy snippets exchanged by writers. http://scififansat.blogspot.com/
My contribution this week comes from A Tale of Two Colonies (Free this weekend).

Why she wants to escape Terra
Lily strode through the grimy subterranean passages to her tiny room, flushed with the success of her performance and indifferent to the hunched figures of the silent passersby. She ignored the group of five ragged youths lounging idly at the corner, until they moved deliberately in her direction.
“Out alone!” one man jeered, clearly believing her to be vulnerable.
“We’ll give you a good time!” another man called with vulgar intentions, reaching out to grab her arm.
She swiveled rapidly, punching him below the belt. He collapsed with a moan.
Two others advanced angrily on her. She leaped at them, aiming a vicious kick. Her target crumpled in agony, clutching at his groin. The third man hesitated, unluckily for him. Her fist thudded against his jaw and he sagged to the ground, unconscious.
One of the two youths, who had hung behind well out of the action, shouted, “Watch out! It’s Tiger Lily. I saw her fight in the arena.”
The other man called, “She’s big trouble! Let’s get out of here!”


Please return to SFFSat and read the other snippets.
Your comments are welcome.