A 90-page coming of age novella in the realms of magic: Rosemary's Quest


What would you do if an evil force threatened your home?


Seventeen year old Rosemary Summers lives with her family in their farmhouse outside the medieval village of Twyford. Rosemary has no friends. The village children call her a witch, but she doesn’t know how to work magic. When the shadows of the Demon King, Kafkad, threaten her family’s farm, she sets out on a quest for the White Wizard Strange. He was once famous, but now he is almost forgotten. No one knows if he still lives. On her journey, Kafkad’s minions pursue her through the wilderness. When she meets the powerful wizard, Rosemary’s life will change for ever. She must learn to harness her own magic in the battle to defeat the Demon King. 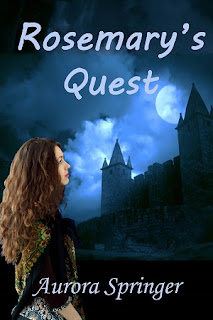 The hermit said, “The Shadow of Kafkad falls on Peliore. What would you do?”


Her eyes flashed and Rosemary replied, “I would destroy the evil king, Kafkad. Can you tell me how to do this?”


The hermit’s eyes gleamed, and then, he closed his eyelids to contemplate her request. Petron was silent for long moments before answering, “There are means that a powerful magician might employ to attack such an evil one, but he is well guarded. Alas, I know of no one with the power to oppose Kafkad, the Demon King.”


Rosemary’s heart sank, but she persisted, recalling the conversation of the previous night, “When I was a child I heard stories of a White Wizard called Strange. Is he still alive and could he help us?”


The hermit glanced at her in surprise. “Why yes, there was such a wizard, although I have heard nothing of him for many years now. Let me consult the oracle.” Petron opened the tattered book and gently turned the fragile pages to find the right place. He made strange signs over the stone and gazed into it. Once more, he flicked through the pages of the ancient book. Finally, he sighed, “As far as I can establish, the man, Wizard Strange, still lives. But, I cannot fix on him, or determine if he retains his magical powers. Look, here is his castle.”


Rosemary stared at the crystal. It was traced with greenish lines, and as she concentrated these lines seemed to flow into an image. She saw a turreted castle built of weathered gray stone. It stood on a hill in front of a mountain range. When she attempted to focus on details, the shapes blurred.


The hermit spoke again, “You will find Wizard Strange in that castle, if indeed, he is alive. I have maps to guide you on the way there.”


Originally published as The Wizard Strange


A harsh voice spoke, “What do you want of me? Ask or be gone!” It seemed to come from everywhere in the room.
Recoiling from the cold voice, Rosemary wondered if the wizard would be of any help. Her journey would be wasted if he were as bad as the Demon King. She cringed at the thought that she faced an evil wizard. His words scared her more than had the uncanny floating head. Rosemary recalled Emilian, the old nursemaid who had loved the boy Simon Strange. She resolved to discover if this icy wizard had any humanity left in his heart.
Her voice trembled. “I have come to beg help, not for myself, but for all the people enslaved by the Demon King, Kafkad.”
The harsh voice replied, “Many years have passed since anyone disturbed my studies.  Why should I help you?”
Rage swept through Rosemary, and she exclaimed, “No one visited your castle because you repelled them with storms and spells of fear. I have traveled from the border of Peliore on a faint hope. No one else can help the people of Peliore.”
Waxing incoherent, she sobbed, “Maybe the Shadow will imprison you too. Why is this room so cold? How can you bear the cold?” Shivering with cold and exhaustion, she cried, “Are you no longer human that you cannot care?”
In the silence that followed, the rigid figure of the wizard stirred slightly. “Cold,” his voice echoed.
It was too late for Rosemary. Swaying with weariness, she recoiled in alarm at a touch at her shoulder. Overwrought, she screamed, and backed away from the bodiless hands reaching for her. She stumbled against a wall and grasped at the smooth stone of reality.
“Oh, for the warmth of a fire,” she muttered through clenched teeth.