Dragons of Vkani is the sequel  to The Lady is Blue in the series Atrapako on Eden.

Dragons of Vkani is a science fiction romance with action set on the two planets, Eden and Vkani. Eden is a terraformed planet colonized by humans with a small population of Atrapako from Sa Kamizan's spaceship. Vkani is the home world of the Atrapako. 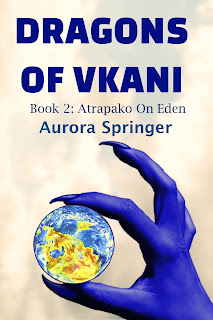 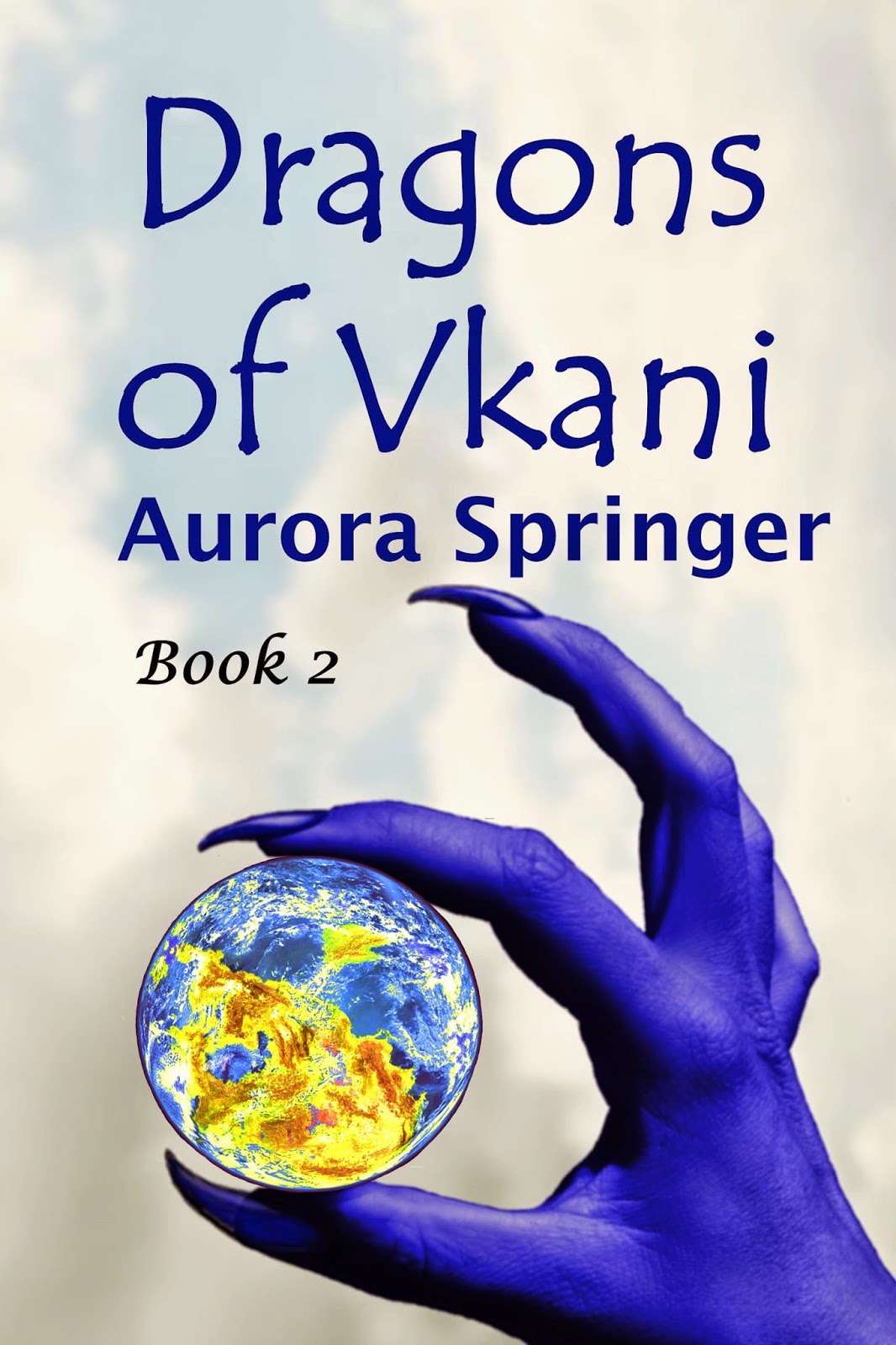 The meeting and adventures of the Blue, Sa Kamizan Veedak, and Dr. Lucy Stannis are described in the first Book “The Lady is Blue.”
The happy family life of Sa Kamizan and Lucy Stannis is interrupted when the Space Traders bring a distress signal from his sister, Veela. They must travel to the hostile Atrapako planet of Vkani to rescue Veela, the Dragon Lady of Ravenak.  In a break from strict tradition, Sa Kamizan befriends two Reds, the Ziggurak brothers, from the unnamed, dispensable class of soldiers/laborers. The rescue mission is combined with a scientific expedition led by Dr. Jun Danzho and Te Tamarkis Varenne to probe the Deadlands for evidence of Lucy’s hypothesis of an ancient nuclear holocaust. The rescue teams encounter new friends and deadly foes in the hostile, barbaric environment where warlords wage battles amid ferocious sandstorms. In their search across the inhabited continent, Sa Kamizan demonstrates his prowess with a sword, while Lucy employs explosives, and, of course, the dragons, as they contend with treachery by power-hungry Blues.

The Atrapako sport scales, vicious claws on fingers and toes, and a spiky crest rises over their heads. The hero, Sa Kamizan Veedak, and the heroine, Dr. Lucy Stannis, met in the first book, becoming romantically entangled despite conflicts between Atrapako and Terran stock humans on Eden.

The huge white ship popped into real space and wended its slow, sub light-speed course toward the small yellow star near the tip of the Sagittarius spiral arm of the Galaxy. As the ship approached the yellow star, silvery wings unfolded and rotated to catch the faint solar energy. Two messages were beamed to their destination, the blue and white planet of Eden. The first message was the standard “open for trading” signal on the official communication wave. The other, private signal shot through a special, secure channel.


Short excerpts from Dragons of Vkani, the upcoming sequel to The Lady is Blue.

Excerpt 1 - at the beginning: Lucy and Sa Kamizan meet her brother Jamie Stannis on the Space Trader ship the Voyager Pegasus.


Jamie said solemnly, “My sister and my brother, I have stood on Vkani.” Evidently, he shared his sister’s flare for the dramatic line.
Lucy’s face blanched and Sa Kamizan’s crest flared in alarm. He whispered, “Ah! You were right, Lucy!”
“Tell us your story,” Lucy said, cringing with an icy shiver of fear and clutching at her husband’s sturdy arm.
Jamie said, “Three months ago, the Space Voyager Pegasus intercepted a faint signal whispering through real space. Its message will reach Eden in some twelve years’ time. Let me play it for you.” He switched on the com and a woman’s voice spoke in Kavkani, the native language of the Atrapako. The undulating crackle of static added a sinister overtone.
A soft, urgent voice said, “Sa Kamizan Veedak, if your fortunes have led you to a safe haven amongst the stars, we beg for your help. We are besieged and desperate. Your sister, Te Kamizan Veela, Lady of Ravenak.”
Sa Kamizan hissed, “It is the voice of my young sister, Veela.” He gazed wide-eyed at Lucy, announcing with a stubbornly resolute expression on his blue scaled face. “I must travel to Vkani and rescue her!”


Excerpt 2 - under Starry Skies
The hero and heroine are not ardently romantic at this time, despite the moon Venus. Read Book I: The Lady is Blue to discover why.


Sa Kamizan and Lucy lingered outside, savoring the clear night sky. They stared up, enthralled, at the spectacle of the clustered stars of the galactic spirals.
“Which direction is Vkani?” Lucy asked the big Blue standing at her side.
He pointed to the west, “There, beyond the bright red star. The solar system is surrounded by dense cosmic clouds. Few stars were visible from my planet.”
As they stared up, the yellow moon, Venus, rose over the black shoulder of the Alta Mountain and the stars dimmed in its bright light. The moonlight brightened the pale skin of Lucy’s face and hands. She looked up at her mate. The craggy contours of his head were a study in contrasts. The moonlight reflected on the scales on his forehead and picked out individual spines of his crest. His eyes glinted within deep shadows cast by his thickly scaled brow.
Lucy broke the silence with another question. “How many moons orbit Vkani?”
He inclined his head toward her, and replied in his precise way, “There is only one moon. We called it the Red Child. Why did you not ask me these questions before?”
“You did not want to talk about your forsaken planet. Now, we’ll travel in the Terran ship and I am eager to see the place you were born.”
“My birth place was destroyed years ago,” he remarked coolly.
“Don’t be pedantic, love! Surely, some places you enjoyed are preserved. Doesn’t your sister live in the Vagurnakoram Mountains?”
“Yes, we both enjoy the mountains,” he murmured, slipping his arm around her.
She raised her eyes and searched the skies again. A cold wind swept down from the mountain tops. Ominous dark clouds drifted across the moon, blocking its light.
Lucy shivered. “Let’s go inside, Veedak. Space is cold and empty. I want to sleep in your arms tonight.”
He gripped her arm, whispering, “I missed you last night when my ribs were healed in the hospital.” She leaned against his warm chest as he kissed her, his claw tips tickling her skin through her shirt. Fierce joy flooded her mind in anticipation of their dangerous expedition.