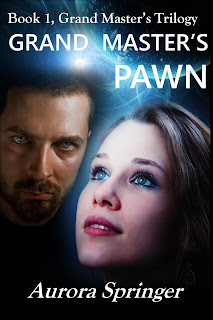 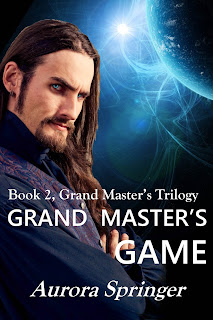 
Empath, Violet Hunter, travels the galaxy on missions for her mysterious Grand Master using the vast web of teleportals. Life-threatening cracks appear in the portals and Violet agrees to investigate the disruptions. When she discovers the perpetrator comes from within the ranks of the Twelve Grand Masters, Violet penetrates their curtain of secrecy to fulfill her task. Armed with only her erratic powers and a mishmash of allies, she must challenge the most powerful beings in the galaxy.

Book 1 of the Grand Masters Trilogy.

Two blue beams emerged from the round eyes of an ugly stone griffin, casting a weird light over the walls of the small room. A deep, resonant voice spoke, “I am the Grand Master and you will serve as my pawn.”
“Yes, Grand Master,” Violet said, refusing to show fear at the eerie, disembodied voice. “What may I call you?”
“You will call me Grand Master,” the haughty voice held an unpleasant edge.
Violet resolved to assert her independence instead of retreating into her usual passive acceptance, and said indignantly, “Grand Master, do your pawns have individual names?”
The room vibrated and psychic pressure built up against her. “You are insolent, Violet Hunter!” the Grand Master growled.
Shivering at the menace in his words, she stepped back against the wall, and instinctively shielded her mind. His psychic power was impressive since he was not physically in the room. Unexpectedly, Violet sensed a faint drift of amusement, the mental equivalent of a smile.
“Hunter is a good name for your vocation,” he remarked in a milder tone.
Violet stiffened; he must never learn the truth. She hunted him.

The Grand Master's avatar is a stone griffin/gryphon.